January 10 every year is National Save the Eagles Day, a day meant to draw attention to the birds and ongoing conservation efforts to protect them. 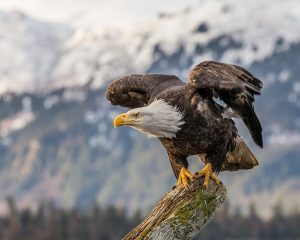 In the mid-1900s, bald eagles were dangerously close to extinction as a result of pesticide use, habitat loss, and hunting. In 1940, the Bald Eagle Protection Act was passed which outlawed killing or capturing the bird. But at the same time, pesticide use was increasing, which included DDT. Once sprayed to control pests, it eventually washed into waterways where it was absorbed by fish and aquatic plants. When eagles then ate contaminated fish they too were poisoned. As a result, eagles produced eggs with thin shells that broke or never hatched. By the early 1960s, fewer than 500 pairs of eagles remained down from roughly 100,000 when the bird was adopted as the national symbol in 1782.

Rachel Carson, in her 1962 publication of Silent Spring, is largely responsible, if not solely responsible, for bringing the reality and horror of pesticide use into the public eye. The book was a result of years of scientific study that withstood the wrath of both the pesticide industry and those who did not believe a woman could possibly understand such matters. DDT was finally banned in 1972.

But back to eagles. The bald eagle was part of the Class of ’67, a list of endangered species that predated the Endangered Species Act in 1973. It was later put on the ESA list. Thanks to efforts both small and large around the country, the bald eagle population recovered to the point, that in 2007, bald eagles were removed from the list of threatened and endangered species altogether. Every time I see a bald eagle, I feel lucky. And I am thankful for the combined efforts of so many people who helped the populations recover, and still work to protect their future.