I would like to start the new year with a look at some of the new species discovered last year. Scientists estimate that there are over 8 million (some even say as many as 1 trillion) species of plants and animals in the world, but only a little over 1 million have been identified. In 2022, the California Academy of Sciences researchers and collaborators around the world made 146 new species discoveries from the tops of mountains to the depths of the ocean in locations across the globe. 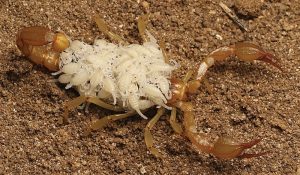 One of the newly discovered scorpions, Paruroctonus soda, with 51 juveniles on her back [Photo credit – Harper Forbes and Prakrit Jain]

The discoveries included new species of fish, moths, lizards, flowering plants, frogs, and even sharks! Two high school students in California were among those to make these discoveries. Working with a scientist at the California Academy of Sciences, they identified two new species of scorpion living in dry lake beds in the state. Another researcher tripled the number of identified Bavayia gecko species that live in forests on the New Caledonian islands in the Pacific; previously there were 13 identified species and now there are 41. Other fun discoveries included a tiny translucent clam thought to be extinct, a new wild onion, a sea star 1.2 miles below the surface of the ocean, a .6 inch sea slug whose Latin name means small bean, and 30 different ant species!

The result of these discoveries helps guide habitat conservation efforts and broadens our knowledge of Earth’s biodiversity. May 2023 bring you a year of your own discoveries and adventures. As Calvin said to Hobbes in Bill Watterson’s last Calvin and Hobbes comic on December 31, 1995, “It’s a magical world, Hobbes ol’ buddy…let’s go exploring!”