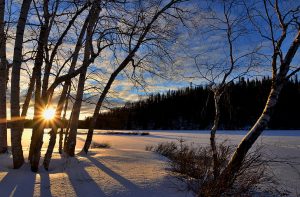 We are fast approaching the winter solstice and the day with least amount of sunlight in the Northern Hemisphere. The solstice officially marks the beginning of winter, though many places have felt the bite of winter for weeks. After December 21, the sun will reach a little higher in the sky each day and daylight minutes will increase.

It would make sense, then, that the earliest sunset of the year is on or near the 21st. But it’s not! In fact, the earliest sunsets of the year happen about two weeks before the solstice (for most of the US) after which sunsets start occur later and later in the afternoon. However, sunrises are later in the morning leading up to the solstice, thus the decreasing amount of sunlight each day. In addition, the latest sunrise also does not occur on the solstice, but you guessed it, a couple weeks after (around January 3).

Why don’t they line up? The answer has to do with Earth’s elliptical orbit around the sun. Because of this, Earth moves faster around the sun at different times of the year. We travel faster in our winter months than in the summer months. As a result, sunsets get ahead of “schedule.” That schedule, though, is human made creating a discrepancy between anthropogenic clocks and the sun. On average, a “day” is 24 hours. But the time between solar noon one day (the point at which the sun reaches its highest point in the sky) and solar noon the next day is rarely 24 hours. In fact, the solar day is actually longer than 24 hours near both the summer and winter solstices, and shorter than 24 hours near the equinoxes. It translates this way – because solar noon occurs later each day, sunsets are also later. Anyone wanting a more details can click here or here.

Another fun solstice fact – the latest sunset in the summer is actually a couple weeks after the summer solstice!