Here’s a thought for you – algae as the next big food source. The first reaction to that might be similar to one you’d have if I mentioned cricket powder as a source of protein. Yet an ever-increasing world population (estimated to top 10 billion by 2050) coupled with climate change might force our hand. And while algae might not sound all that appealing, it does have its benefits. 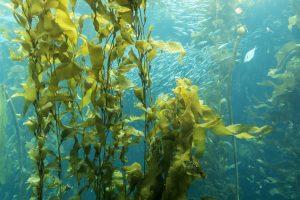 There are nearly a million species of algae some of which include the clumps you might find floating on a stagnant pond. Some are considered micro-algae such as phytoplankton, which is the base of the marine food chain. But there is also macro-algae that includes kelp and seaweed.

Growing algae does not require cultivating additional land. Nor does it require freshwater to water them, or fertilizer. It grows much faster than terrestrial plants – some species of kelp grow as much as 2-3 feet per day! If that’s not enough to convince you, consider that seaweed does a remarkable job at sequestering carbon – quite the opposite of our current agriculture industry. Research has also shown that seaweed farms greatly improve water quality.

Asian countries have cultivated seaweed for thousands of years. Not only is it a great source of protein, it also has five times the amount of calcium than milk. Algae also contains fiber and micronutrients such as iron, and it is full of vitamins. Today, the both the micro and macro-algae farming industries are thriving and expanding.

Perhaps this sustainable, nutritious crop will be the wave of the future (ha ha)!