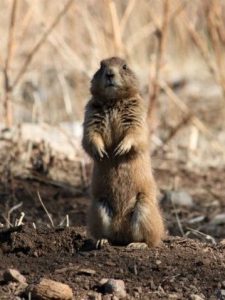 There are people out there who do not like prairie dogs. You know who you are. But I’m here to change your mind. Let’s start with the fact that they are not pests or disease ridden rodents. Like the rest of us, prairie dogs do get sick. In the case of the plague, prairie dogs get it from fleas. However, they usually die quickly and transmission to humans is extremely rare. Further, while prairie dogs are indeed rodents, they do not reproduce constantly like other rodents. In fact, they reproduce only once a year, in the spring, and give birth to 2-8 pups. Females do not even reach sexual maturity until they are two years old.

People who live near prairie dogs are familiar with their barks and chirps. Those calls are actually a complex communication system used in a colony. There are a variety of vocalizations used for different reasons. One of those is the call to alert others of danger. But it’s not a simple warning to duck and cover. Instead, researchers have discovered that prairie dogs can communicate the size and threat of an intruder. The calls also tell others from which direction the threat is traveling and at what speed. When danger has passed, they will also give the “all clear.”

Prairie dogs also dig an extensive network of tunnels and chambers underground – some of these extend for acres underground. They even have designated rooms. Prairie dogs have a nursery, sleeping areas, toilet chambers, and listening chambers near the entrance to the burrow.

If you are not yet convinced that prairie dogs are amazing, consider this: prairie dogs are a keystone species. You read correctly. Prairie dogs are vital to the ecosystems in which they live, and without them the amount of biodiversity drops dramatically. To start, prairie dogs are an important food source for many other animals. Yet they are equally as important to the prairie itself. The burrows prairie dogs dig aerate the soil and let water in. The digging also recycles the nutrients in the soil. And, of course, prairie dogs help fertilize that soil. All of this activity increases the diversity of flowers and grasses on the prairie. The flowers, in turn, attract more bees and butterflies. Prairie dogs keep the prairie open and free from trees and shrubs, which further increases the diversity of grasses. The diversity of grasses attracts more prey animals which, in turn, attracts more predators. In addition, abandoned burrows provide shelter for other species, including burrowing owls, snakes, and critically endangered black-footed ferrets.

So next time you see a prairie dog, consider all they do to maintain a healthy prairie ecosystem!