I’ve always been a fan of crows and ravens, mostly because they are part of the corvid family of highly intelligent birds. Corvids have large brains, can recognize human faces, use tools, and are incredible problem solvers. 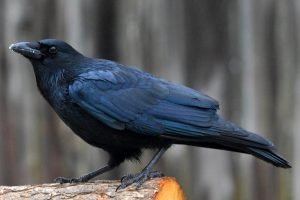 Yet unless crows and ravens are standing next to each other, they are hard to tell apart. So I did a little digging. I already knew that ravens were larger than crows, but apparently ravens are the size of red-tailed hawk, an easy comparison to remember. In addition, ravens tend to travel in pairs while crows are often in larger groups.

If you see a large black bird flying overhead, one way to tell whether it is a crow or raven is to look at the tail feathers. The tail feathers of a crow are all the same length, so when they spread out during flight they look like a fan. Ravens, on the other hand, have middle tail feathers that are longer than the others, so during flight their tails are wedge-shaped. Further, if you see one of these birds soaring for more than a few seconds, it’s probably a raven. Crows flap their wings more. Finally, if you are close enough to the bird to hear a swishing sound produced by the wings, it’s a raven. Crows flapping wings are mostly silent.

A final way to tell these two bird species apart is to listen to them. Crows make the stereotypical high-pitched cawing sound. Ravens’ calls sound more like a low-pitched croaking. While that sounds like a simple distinction, I think it will take listening to a few sound recordings to be able to learn the difference. Still, bring on the corvids. I want to see if I can now tell them apart. Of course, I can always use Merlin’s Bird ID app to confirm (or not). And the bird in the photo? It’s a crow.