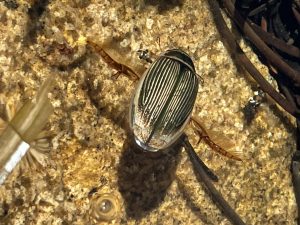 On a hike this fall, once we reached our lakeside destination and ate lunch, I spent some time marveling at the view around me. Then my attention turned to the water. At first glance there was not much to see below the surface. But as usual, a little patience paid off. There! A small critter about an inch long darted through the water from one hiding place to another. It immediately reminded me of the grey sand crabs I used to dig up as a kid on the Maryland shore, though the one in the lake had black and white stripes. But we were a long way from Maryland, both in miles and elevation. This lake is in Colorado at about 10,000’.

I kept watching. There was only one. It swam effortlessly, then hid. I snapped a few pictures. At home I studied the pictures and looked it up. Unable to identify it, I sent the picture to the National Park Service (they’ve helped with identification of various things before). They were slightly stumped too, and my email was forwarded several times. Eventually the ID came back as a predaceous diving beetle.

I had already concluded that it was some kind of beetle, but had no idea that beetles actually swam. Or even lived in water for that matter. Of the more than 24,000 beetle species in North America, about 4% are aquatic. As I had discovered from watching the beetle in the lake, they have powerful, hairy hind legs for swimming. Yet while they are aquatic, they do not spend their entire lives in water.  Eggs are laid above the water on plants; when they hatch the larvae (called water tigers) will fall into the water. Once mature, they crawl out. They pupate in the damp soil and vegetation by the water. Once they reach adulthood, they reenter the water. They do breathe air, so when under water, these diving beetles carry air with them so they can stay under for an extended period of time, like a scuba diver with an air tank.

As their name suggests, these beetles are carnivorous predators, hunting insects, tadpoles, small fish, snails, and even other water tigers. When they grab prey, they inject it with an enzyme that begins the digestive process. The innards of the prey liquify, making it easier for the beetles to extract. The adults are also chewers and will eat carrion. Be on the lookout in a lake near you – there are about 500 different species of predaceous diving beetles in North America.