I am not a big Halloween fan but figured it would be rather bah-humbuggy of me to ignore it altogether. Besides, what better to discuss on Halloween than zombie fungus? The first thing to know is it’s not the fungi themselves that are zombie-like. Instead these fungi got their name because of they turn their victims into zombies. And for the record, there is not just one zombie fungus out there in the tropical forests of the world. Oh no. There are hundreds of species of zombie fungus and each targets a different insect.

Here’s how it works. The spores of the fungus infect an insect. Then the fungus hijacks the insect’s brain and controls what it does. This mind control causes the insect to act peculiarly and to seek a location with conditions optimal for the fungus – just the right amount of light and humidity. The insect then clamps down on a leaf or twig or stem. And dies. 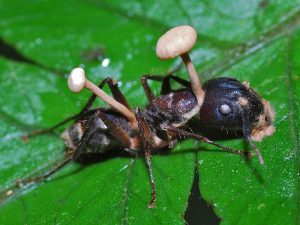 But the fun has only just begun. The fungus feeds on the insect’s innards. It grows. Then after a few days, the fruiting body of the fungus sprouts out of the insect’s body. Sometimes one stalk. Other times many, many more. Like limbs reaching out from the insides of the insect, they grow and grow and grow, for up to three weeks. Eventually, a stalk will spew spores from its tip, up to 30,000 in one second. And the whole process starts over again.

And creepy though it may be (and a bit disgusting), these parasitic fungi have an important role to play in the ecosystem – they keep the populations of other species in check. This maintains a balance in the ecosystem which also promotes biodiversity.