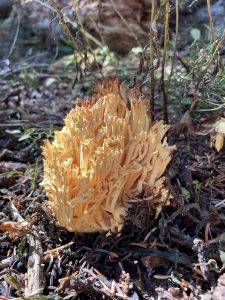 Behold Ramaria largentii. I was drawn to this 6-inch high thing because it was a splash of bright yellow on a dark forest floor. It practically begged for attention. When I knelt down, I was further intrigued. It was like nothing I’d ever seen, with tiny branch-like arms twisting around each other as they reached toward the sky. But what was it? Some kind of mushroom, I wondered? So I touched it. As we all know, you don’t touch things in the forest you know nothing about. Still.

It was the consistency of stiff rubber, but the branches moved apart with a gentle push. A solid little thing, clearly healthy. I did conclude it had to be some form of fungi, and then continued to ponder whether I’d lose my finger or keel over right then and there. I’m happy to report I made it safely back to the trailhead and I still have all 10 fingers.

Back home I learned both its Latin name and that it is one of about 200 species of coral fungi. Coral fungi! A closer look at the picture shows that it does actually resemble marine coral to a degree, thus the name. I also discovered that people liken it to cauliflower in texture. This type of mushroom is edible. However, pink or reddish ones are to be avoided. Yes, slightly poisonous. This mushroom is both good for you as Indigenous peoples surely understood, and has medicinal properties (antimicrobial, anti-oxidant, and anti-cancer). Which leads me to a new word… Ramaria largentii is a nutraceutical in that it is both nutritious and has medicinal value.