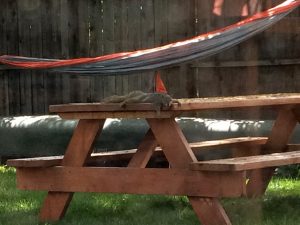 I feel that I would be remiss if I did not give this word the attention it deserves. Years ago on a hot, hot summer day, I saw a squirrel splayed out on our picnic table in the shade…front legs forward, back legs backward, stomach flat on the table. My first thought was to wonder if it was okay. But then I guessed it was probably just hot and was likely just trying to stay cool.

I have now learned that there’s a word for that…splooting!

Animals stretch out like that on cool surfaces to try to reduce body heat. Some use the scientific term, “heat dumping” or “thermoregulation.” I prefer splooting. I have recently seen the neighborhood rabbits splooting (because it is STILL hot outside). According to the National Park Service, this is referred to as, “sploot season.”

Apparently marmots, bears, chipmunks, and other mammals sploot too. And splooting isn’t just for wild animals – pets sploot! Corgis are especially well-known for this (who knew?). Technically, if you were too sprawl out in an effort to cool off, you’d be splooting too. After all, it is sploot season.