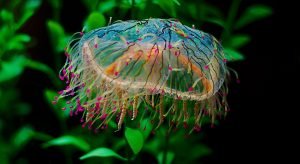 Jellyfish often get a bad rap. Perhaps that is because they are so mysterious. Squishy. A tad creepy. And some are deadly. Yet as with so many other things, the more you know, the more you can appreciate them. For starters, jellyfish aren’t fish at all – they lack scales, gills, or fins. Anatomically, they are far different from most other animals, too. Not only do they lack a brain, they also do not have bones or blood (though some have eyes, and the box jellyfish has 24!).

Jellyfish are part of the phylum Cnidaria that includes more than 10,000 very diverse creatures (so diverse that some scientists simply refer to them as “gelatinous zooplankton”). They live in a wide variety of habitats from deep ocean to near the surface, from freshwater to ocean. They also come in a variety of sizes, including the more than 400 pound Nomura’s jellyfish and the 120 foot long Lion’s mane jellyfish, as well as the quarter inch wide sea fur and the 7 inch wide Atlantic bay nettle.

Another anatomical fascination includes how they reproduce. Some reproduce sexually, while others reproduce asexually. Some are able to divide themselves in two to create a copy of themselves. Others produce pods of cells to reproduce. There’s even one species called the immortal jellyfish that seem to be able to evade death; instead of dying this tiny jellyfish somehow transforms itself into a juvenile and starts the life cycle again. New word – this ability to transform one type of cell into another type of cell is called transdifferentiation.

Jellyfish have been since long before the dinosaurs. Because of the aforementioned lack of bones, fossils of jellyfish are hard to come by, but available evidence shows that these creatures have floated in the world’s oceans for 500-700 million years. Some jellyfish fossils were even found in Utah from a time when that part of North America was under water! Today we continue to witness their incredible adaptability because they continue to thrive in the face of climate changes that result in ocean acidification and warming oceans.

A few other interesting facts include that jellyfish are rarely seen in groups. When they are in a group, usually following food source or traveling in the same water current, it’s called a bloom, swarm, or smack. It is true that they are among the deadliest creatures on Earth. And some jellyfish are edible and are even considered a delicacy in Japan and Korea (uh, no thank you). After reading this, I encourage you to look at images of jellyfish and perhaps those images and this information will help you have a new understanding of these gelatinous zooplankton!