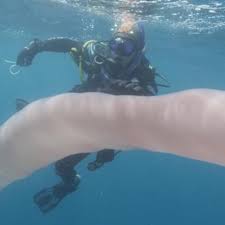 Imagine swimming in the ocean and coming across what looks like a giant sea worm . It’s translucent, bioluminescent, and looks a bit like a windsock wide enough to swim through. You have just met a pyrosome (some can be up to 60 feet long!), which is not actually a worm. And, it’s not a single creature. It’s a colony of hundreds or thousands of tiny organisms called zooids. Zooids – new word!

Zooids are multicellular organisms capable of copying themselves to add to the colony. Each individual is also attached to others by tissues, forming a “gelatinous tunic.” This jelly-like body joins them together and allows them to move through the ocean. The individuals are also known as sea squirts because they are filter feeders. They pump water through their bodies allowing them to catch phytoplankton, bacteria, and other food sources.

Did you catch that they are bioluminescent? Each zooid can emit blue-green light (like fireflies of the sea!); when one does the others around it do too. And sometimes the light from one colony will cause another colony to light up. These zooids and the colony they form are also delicate and fluffy. Now fluffy isn’t a word usually associated with strange underwater sea life, but one diver, RR Helm, described them this way: “It felt like an exquisitely soft feather boa.”

If you do happen to come across one, consider yourself lucky – they are considered by scientists and divers as the unicorns of the sea because they are rare, improbable, and mysterious.