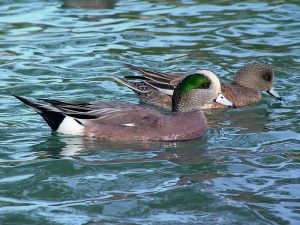 As I walked along the creek path recently, I stopped to watch the ducks like I often do. After a moment I realized that one of those ducks was not like the others. Looking more closely, I noticed more of them. They were not the mallards that I am used to seeing. Instead, the males had a white stripe atop their heads and a green eyepatch. The females were more brown, with a grey-brown head. I later learned they are called wigeons, a word and a bird I’d never heard of before. Perhaps I should have paid closer attention.

Like other ducks, they congregate on a variety of water habitats – lakes, rivers, marshes, estuaries, bays, and tidal flats. They are mostly plant eaters, foraging on both land and in the water. During breeding season, though, they will eat more insects as well as aquatic invertebrates (which includes yummy morsels like horseflies, midges, beetles, crustaceans, and mollusks).

Males, like with many other birds, go to great lengths to attract a female during breeding season. However, male wigeons leave before eggs even hatch – yes, they are deadbeat dads. Lucky for moms, the newly hatched young leave the nest almost immediately and can feed themselves. We should all be so lucky. She does stay with the young brood, like a good mom, until they can fly (approximately 45-63 days after hatching).