It’s bat season and I’m not talking about baseball – I’m talking about the flying mammal. Every spring, approximately 1.5 million Mexican free-tailed bats return to the Congress Avenue Bridge in Austin, Texas (and others return to different places across North America). That’s a lot of bats! The colony in Austin first arrived after the bridge was renovated in the early 1980s. And while the engineers in Austin didn’t intend to build a bat hotel, that’s exactly what they did. The new box-beam system created spaces that were exactly the right size for bats to roost in. Not only that, but the bridge stays warm on cool nights and keeps the bats safe from predators. 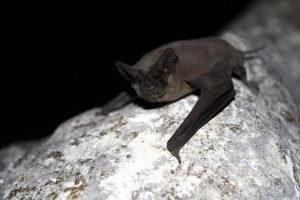 But when the bats first moved in many people wanted the bats exterminated. Newspapers ran scary stories about the bats with headlines such as, “Bat Colony Sinks Teeth into City” and “Rabid Flying Rodents Infest the City!” Health department officials were not happy about the bats either at first. In fact, they actively tried to prove that having the bats in the city was unhealthy.

Their study, however, demonstrated exactly the opposite. The water quality under and downstream from the bridge proved to be the same as above the bridge. In other words, bat guano was not polluting the water. Other tests showed that the bridge concrete was wearing as would be expected in the normal life of the bridge – the bats were not harming it. And the bats themselves were healthy.

Thanks to the help of one man, Dr. Merlin Tuttle, who helped educate the public, people soon learned that bats are a natural, integral part of the ecosystem. During the summer in Texas, the colony will eat five to ten tons of insects per night. In addition, as insect predators, they help farmers by eating pest insects. One Mexican free-tailed bat from Austin’s Congress Avenue Bridge can eat enough moths in one night to prevent 20,000 or more eggs from being laid and keep farming from having to spray insecticides to protect crops.

The truth is, if you don’t try to touch or handle bats, the odds of being bitten or getting sick is close to zero. Today, the Congress Avenue Bridge bats are an Austin icon. The bats arrive every March and stay through October. During that time tourists arrive too, just to see the bats.