I am not one to wear pearls, nor do I own any, but I am intrigued by how they are made. I’ve always been under the assumption that they’re made exclusively by clams. Well, we know what happens when we assume. 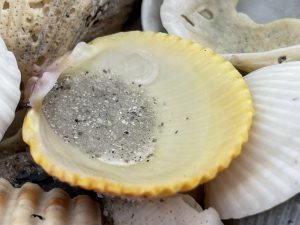 No pearl inside this clam (a species called a buttercup lucine)!

As it turns out, ANY bivalve can produce a pearl. And ironically, they are actually the product of an irritant inside a bivalve’s shell. If some matter of debris, like a grain of sand or a parasite, gets caught inside the shell and the mollusk cannot flush it out, it’s like us getting a splinter. Since they don’t have tweezers of their own, they coat the foreign object in the same material used to build their shells. Eventually it forms a pearl.

But not all pearls are created equal. Mussels, oysters, and clams are the only species of bivalves that yield the prized pearls. They produce nacre, also known as the mother-of-pearl. Therefore, if you’re looking for jewelry, seek out one of those guys.

However, most pearls harvested and sold today are not actually natural pearls. Instead, they are cultured pearls cultivated by oyster farmers. In this case the “farmer” raises the oyster for about three years. Once they are mature enough, an irritant is implanted inside the shell. The mollusk is then returned to the water for the next two to five years as the pearl is formed. Later the pearl is harvested and sold. Interestingly, naturally occurring pearls are very rare; in wild oysters, only about 1 in 10,000 will produce a pearl.