While collecting shells on the shore, it’s easy to forget that those shells were once homes to living creatures. The small, soft-bodied creatures who once inhabited the shells, called mollusks, include scallops, clams, whelks, conches, and more (note: there are other mollusks that do not have shells, including octopuses and squid). 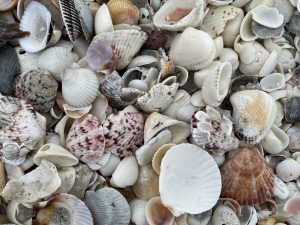 When these creatures emerge from their eggs in the ocean, they are tiny, free-swimming larvae. Within a few days they begin to build their shells. These shells are built layer by layer throughout their lives. The shells are built by a part of the mollusk’s body called a mantle. The mantle builds the shell using salt and chemicals from the ocean, mixed with special chemical proteins in their own bodies. As the body grows, the shell is enlarged and extended, and new layers of shell are added (unlike hermit crabs who move into larger and larger shells as they grow, mollusks’ shells grow with them). Not only that, but if part of the shell is damaged, mollusks can make repairs!

And similar to other creatures that leave a skeleton behind when they die, shelled mollusks leave behind their shells. Eventually those shells wash up on the beach. But the story doesn’t end there. The shells are still important. They can be used by hermit crabs or as shelter for young fish. Some birds even use shells to build their nests. Shells that remain on shore can help to stabilize and anchor sand on the beach. In addition, as the shells are crushed by waves and other forces, they become sand themselves! Further, as they break down, seashells provide nutrients for sand-dwelling organisms. Thus, as I have just learned, shells should be left on the beach!