I will admit that, until very recently, whenever someone said “scallops” I immediately thought of a delicious meal. But as is often the case, with a closer look and a little research, I now have a new appreciation for those bivalve mollusks.

Let’s start with the fact that I didn’t even know what I was seeing on the beach was a scallop in the first place. But yes, scallops are those fan-shaped, corrugated shells. The corrugations, called ribs, make the shell strong and hard to break. In addition, the corrugations make the shells great places for other plants and animals to grow, which in turn helps to camouflage the scallop. If the camouflage doesn’t work and a predator nears, though, scallops will swim away! No kidding. By clapping their shells together, scallops can actually move quite quickly! 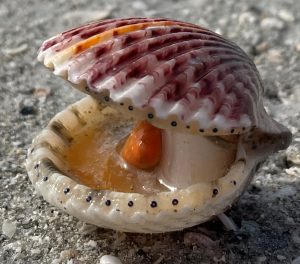 This scallop was very much alive (clapping its shells together!) and was returned to the ocean.

The scallops open and close their hinged shells using the whitish muscle inside the shell (visible in the photo). That muscle, by the way, is the part harvested for the aforementioned meal! There’s also a bright orange section inside the shell, called a coral. Scallops eat plankton; when water enters their shells, mucus traps the small organisms and cilia moves the meal to the scallop’s mouth. But perhaps the best scallop fact of all is that they have up to 200 eyes! They line the edge of their mantle and can be black to bright blue (look closely at the picture…there they are!). The pupils of these eyes dilate in response to light and the retinas focus light, but scientists are still learning about the dynamics of scallop eyes.

So now the question is, what will you think of the next time you hear someone say, “scallops”?