I’ve done a post before about hummingbirds to bring attention to the amazing discoveries scientists are making about their beaks and tongues. This time I want to celebrate national hummingbird day coming next weekend – Saturday, September 4, 2021 (celebrated annually on the first Saturday of September). There are over 300 species of hummingbirds in the Americas who are now sensing the end of summer and are about to make an epic migration south for the winter.

Photo by Zdeněk Macháček on Unsplash

Hummingbirds fly hundreds of miles (the Rufous hummingbird may migrate up to 4,000 miles!), beating their wings 15-80 times per second depending on the size of the bird. They fly alone on this epic journey – even juveniles. They stay low, just above the trees or water, to keep an eye out for food sources. Surely such a journey requires a lot of calories! These tiny birds can fly over 20 miles per day; but do the math – that’s a lot of days in flight.

Safe travels hummingbirds – I wish I could go with you. I am already looking forward to your return in the spring! 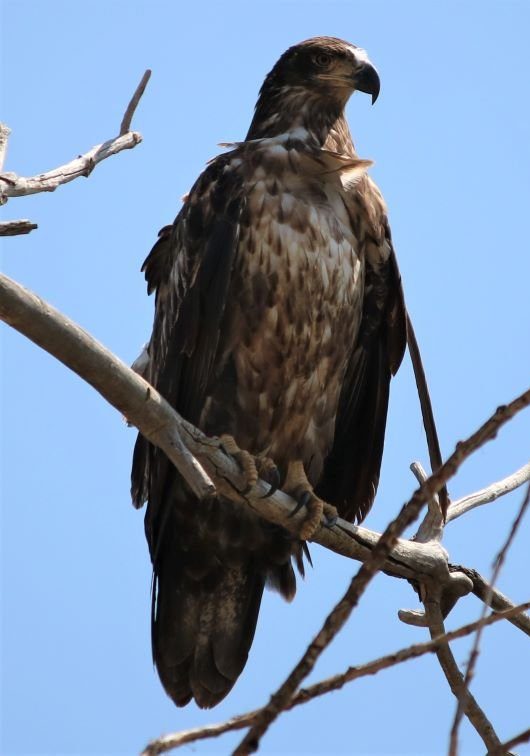 While visiting the Rocky Mountain Arsenal National Wildlife Refuge with friend, we spotted a large bird in a tree near a lake. As we approached, it was clear this was not a hawk. It was much too large. Based on the brown coloring (including the brown head), I then assumed it was a golden eagle. I was wrong! We actually saw a juvenile bald eagle. And, as research revealed, that bird is about a year and a half old. It was magnificent and I feel lucky to have see it.

Bald eagles were nearly driven to extinction in the 20th century in the contiguous United States. The first protection of eagles came with the Lacey Act in 1900, making it illegal to take, disturb, transport, sell, import, or export eagles, their nests, eggs, or feathers. Then in 1940, the Bald & Golden Eagle Protection Act strengthened the protections and penalties for harming bald eagles in any way. Still, eagle numbers across the US continued to drop.

The silent killer was the pesticide DDT used by farmers. This chemical made its way into the soil and water, and into the prey of eagles. Eagles that ingested DDT produced very weak eggs, most of which did not hatch. It was not until Rachel Carson wrote Silent Spring in 1962 that this truth was revealed. Nonetheless, a full decade passed before DDT was banned.

When the Endangered Species Preservation Act of 1967, and later the stronger Endangered Species Act of 1973 were passed, bald eagles were on the list. The ESA finally provided the legal backing to actively initiate conservation efforts for bald eagles. This included captive breeding programs and reintroductions, protection of nesting sites, and increased law enforcement, as well as targeted and enforced habitat protection. The efforts were resoundingly successful. By 1995, bald eagles’ status was moved from endangered to threatened. In 2007, bald eagle populations had recovered so well the bird was taken off the Endangered Species List. This is just one of many success stories of the ESA. And even though bald eagles are thriving, I feel lucky every time I see one.

On a recent hike I had the luck to run into this guy and the rest of the herd at about 12,500 feet. It’s hard to believe they can live up that high, eating only alpine grasses and plants – adult males can weigh up to 300 pounds! Somehow they find enough to eat though, and staying up that high keeps them safe from predators (though they do drop lower in the wintertime).

Interestingly, mountain goats are not goats at all. Instead they are more closely related to antelope and gazelles, though they clearly are much woolier than their cousins. You can see that this guy was still losing his thick winter coat. Both male and female adults have the horns, which can be as long as 12 inches, and both have the neat goatee (pun intended). Yet perhaps the most interesting thing about mountain goats cannot be directly observed when you cross paths with them but marveled at when they hop acrobatically from rock to rock. All mountain goats have specialized hooves that allow them to grip the rocks. The hooves have a hard outer margin and a flexible, grippy inner pad. In addition to being nimble climbers, mountain goats are powerful and can jump up to 12 feet in a single bound!

We kept our distance and they kept theirs. And by the time we came back down, the herd had disappeared. Not sure where they went on that terrain, but then again…the hooves. They could’ve gone anywhere!

As we enjoy the last days of summer (where did the time go?!?!?) before school starts up again, thoughts turn to shopping – clothes, shoes, supplies, etc. And believe it or not, the choices you make when you get ready to go back to school can help the planet if you SHOP responsibly.

Consider school supplies – what do you already have around the house? I know that in my house you are never more than 10 feet from a pencil or eraser at any given time. You may have to look for them, but they’re around. Look around your own house. What else can you find? An old binder that you can snazz-up? Spiral notebooks that only have a few used pages (that can, of course, be ripped out) and with a cover you can redecorate? Make it a challenge to see how many things you can find in your house before going to the store!

Now for the clothes. This is a bit harder because most people like new things, kids especially. Yet is there a thrift store near you? Or maybe a consignment store? While there are certainly questionable items in these stores, experience has shown that there are also many treasures to be found. Not only can you save loads of money, but it’s the ultimate in recycling. Also, are there items in your closet you can repair or repurpose?

If you do want to buy new (and this includes school supplies and backpacks), there are few more things to consider when shopping mindfully. Buy items with as little packaging as possible. Shop locally to avoid shipping (which includes both packaging and transportation). And buy items that are good quality because when we buy cheap, these items end up in landfills quickly and we just have to replace them.

The choices you make about consumption really do make a difference. Be mindful, no matter the time of year, and shop responsibly because it’s #YourPlanetToo. 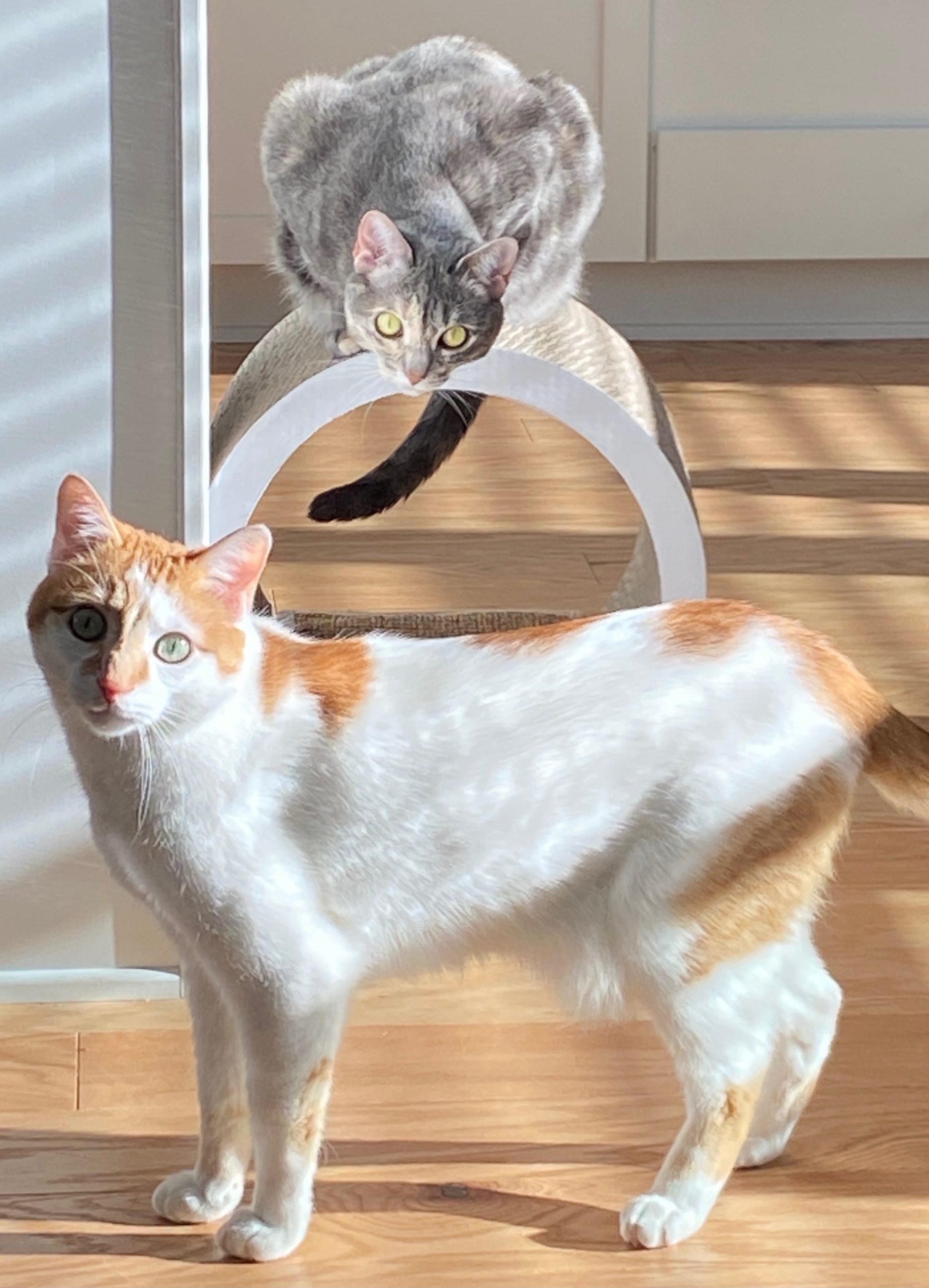 For many people, cats are the perfect pet. Yet among cat owners there is also a great debate – should my cat be an indoor cat or an outdoor cat? For anyone interested in protecting wildlife, HOUSE domestic cats indoors.

An outdoor pet cat is an invasive species. It may seem weird to think about it that way, but essentially a domestic cat is not native to the environment in which you live. Anytime a nonnative species is introduced to an ecosystem, there is the potential for disruption to the native environment. In the United States, domestic cats kill 2.4 billion birds every year. You did not read that number wrong: they kill BILLIONS of birds. Studies have shown that outdoor cats are the number one cause of bird deaths by humans. Cats threaten and kill other wildlife as well. In addition, they disrupt ecosystems and spread disease.

The American Bird Conservancy’s Cats Indoors program is a science-based movement to “build a future that is better for cats, better for birds, and better for people.” It also has information for cat owners about creating spaces indoors that are stimulating and fun for the cat. For those transitioning outdoor cats to indoors, try putting a bell on a cat’s collar so wildlife is alerted to their presence. If you have an outdoor cat, bring it in. And if you have friend with an outdoor cat, help them to understand the effects to wildlife and ecosystems because it’s #YourPlanetToo.