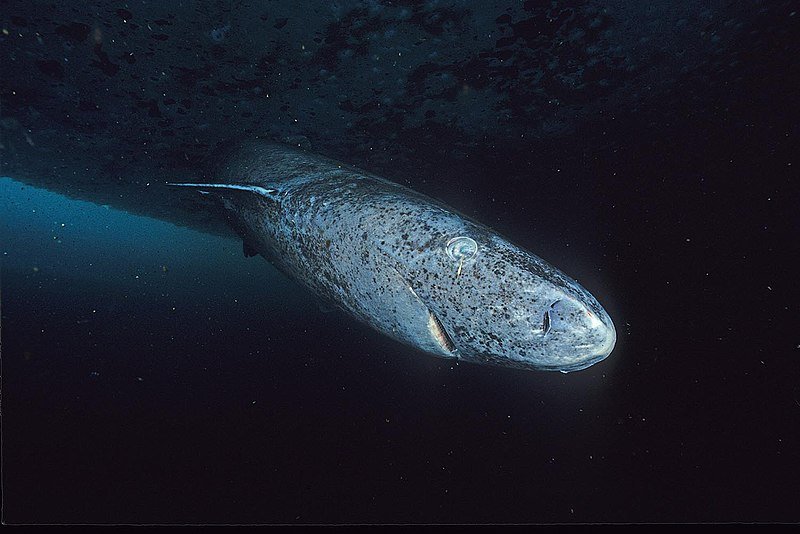 Greenland shark at the floe edge of the Admiralty Inlet, Nunavut (Hemming1952)

Last week I had the honor of reading one of my picture books to a group of second graders (hello Dry Creek Elementary 2nd grade!). Afterwards they asked what I like to write about, and I explained how much I geek out over cool nature and science facts (like the velvet worm). Then, the very next morning a friend sent me a link to an article about Greenland sharks. I geeked out.

The first thing that caught my attention is that they are ENORMOUS yet we know very, very little about them. How is that possible? What we do know is that these elusive sharks can be over 20 feet long (comparable to a great white) and the surface of the skin is covered in denticles – toothlike projections. Greenland sharks love cold, very deep water around Greenland and Iceland, which is probably why they are seen so rarely. Down in the depths they blend into the murky darkness, moving ever so slowly. Their average speed? Less than 2 miles per hour. In addition, they are practically blind. That brings up the question, how do they catch anything to eat? The answer is, first of all, that they are not picky. They will eat just about anything, alive or dead (Arctic seals, reindeer, polar bears, beluga whales, fish, crustaceans), that ends up in the sea. They are scavengers for sure, but they are also ambush predators.

Yet perhaps the most interesting thing about the Greenland shark is how long they live: over 200 years. That is not a typo. And I checked multiple sources. Teams of scientists have used radiocarbon dating to determine the age of captured sharks. One female was approximately 400 years old. That means she was alive at the same time as Galileo, when the Taj Mahal was completed, and while Newton pondered gravity. Truly hard to comprehend, but fun to geek out over.