Robins are a common site across North America. They are so common that we often don’t give them much thought. Yet in the past months I’ve come to appreciate the common birds that populate my yard and visit my feeder, and I find them every bit as fascinating as more extravagant birds. 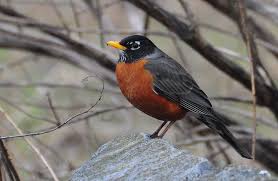 First of all, robins can be found year-round in the contiguous states. Though some do migrate (especially those living in the northern part of the continent), most simply move into the woods in the winter where there are trees and shrubs with berries, and they roost in the trees. That’s why we don’t see them as often in the winter. When warm weather arrives, we will see them in parks and yards pulling up worms after a rainstorm. To find the worms, robins stand motionless, staring at the ground with their head tilted sideways. The search for worms will happen most often in the morning because robins stick to a routine menu: worms in the morning, berries in the afternoon.

If you do see a robin in the wintertime, you are most likely in the company of many more than one. These roosts, as they’re called, can include up to a quarter million birds! Surely I look forward to the days when they’re pulling up worms again, but I’m happy to see one any time.