Treehoppers – they are not birds nor are they primates, they are insects. Very. Strange. Insects. There are over 3000 species of treehoppers (with possibly many more waiting for classification or discovery) and they all sport some weird headgear. Some have helicopter-like protrusions while others have funky horns, barbs, or spires. They are disguises, adaptations to make them look not-very-tasty or to help them blend in with their surroundings. 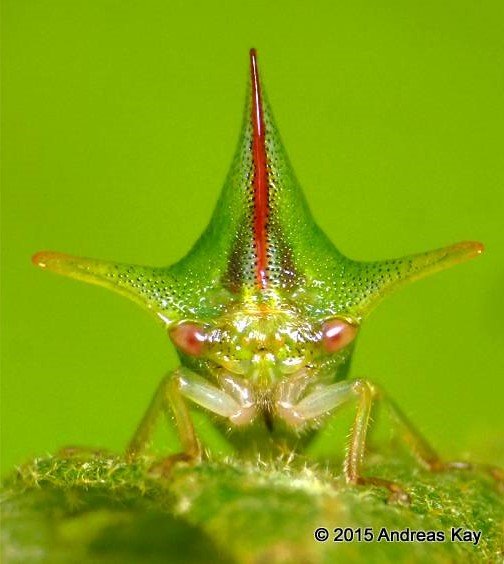 These insects, which live all over the world (except Antarctica) are about the size of a dime. Despite their diminutive size, they communicate by shaking and jerking their bodies which sends signals through the plants on which they rest. While inaudible to humans, scientists have used special microphones to record treehoppers’ calls, clicks, songs, and chirps. This communication helps them defend their young. While most insects lay eggs and leave, treehoppers are good mothers. They stick around to guard their young until nymphs mature and fly away. Of course all of that is interesting, but really, go find more pictures of these strange insects – they’re beautiful!