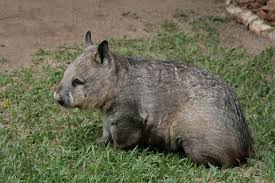 Wombats are cute, stout, short-legged, waddling, marsupials. And they have bums of steel. When chased, often by a Tasmanian devil or a dingo, a wombat will dive headfirst into its burrow, blocking it with its rump of tough, extra-thick skin and almost no tail. A bite from predator on that end isn’t a big deal. They can also deliver a powerful kick.

Their bums of steel aren’t the only interesting thing about wombats. Though they may look pudgy and slow, they can actually sprint up to 25 miles per hour. They are also built for digging, with wide, strong feet and long claws to dig their own burrows – a network of tunnels and rooms. Female wombats even have a backward-facing pouch for their joey, so it doesn’t fill with dirt as she digs. And if that isn’t enough, wombats have square poop. True enough. They have special bones in their nether region that squeeze the poop pellets into cubes