I saw a documentary this week that was both difficult to watch at times while inspiring at others. It was called Mission Blue, featuring the legendary American marine biologists Dr. Sylvia Earl. She has spent decades (she is now 85 and still diving!) exploring the ocean and advancing our knowledge of its importance. 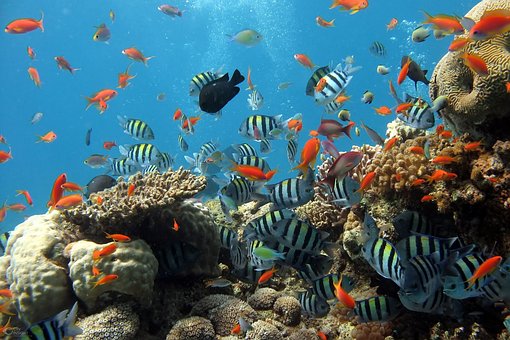 Her research and experience have put her on a mission to save the ocean. Earl understands the devastating effect humans are having on our oceans and founded Mission Blue in an effort to raise awareness and increase the number of marine protected areas around the world. These protected areas are called Hope Spots. These spots are identified as ecosystems that are critical to the overall health of the ocean. Today only 6% of the ocean is protected (compared to 12% of land in the form of parks and reserves).

She also cautions us that everything is connected, including us. The ocean is the heart of the earth. She recently tweeted:

In the documentary Earl shares the ocean’s beauty, reveals the ugly truth about what is happening to it, and yet offers hope. Together, we can create a network of marine protected areas that is large enough to save and restore the ocean. 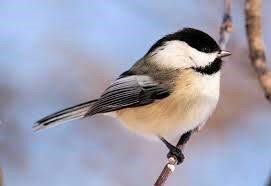 For a while now I’ve been thinking about chickadees (long story). Then one flew into the house the other day…yep, right into the living room and up to the skylight. I managed to get the poor thing back outside without much ado, but took its visit as a sign to do a little investigative research.

Chickadees are often overlooked in the shadow of other remarkable, vibrant birds. They are common, so not considered extraordinary. Oh, but they are. These hardy little birds live across the northern half of North America. Thankfully, too, they don’t migrate, enlivening the quiet and stillness of the winter months. So how do they survive harsh winter temperatures? Controlled hypothermia. More scientifically, chickadees go into a state of torpor on very cold nights. They find a sheltered place, such as the hollow of a tree, fluff their feathers, and slow down their metabolism which lowers their body temperature by 10-20° F and conserves energy. In the morning they warm themselves up to go back to feeding. In addition, they gather and store food to help them through the winter. It gets better…the chickadee brain actually increases in size in the fall so they can remember where they stored the food!

Chickadees also have that signature cheery call, chick-a-dee-dee-dee. That’s not the only one, though. They have many other songs and calls. Apparently the language of chickadees is quite complex. Scientists studying them have identified well over a dozen different vocalizations that vary in pitch and length. As with all birds, the vocalizations are a means to communicate – to stay in touch with a mate, fend off a predator, or announce a food source. These calls communicate danger, too. With black-capped chickadees, their calls also communicate the level of danger. If you hear a chickadee call out chick-a-dee, followed by one or two more “dees” the danger level is low. But chickadees will add over 20 “dees” to their call if the threat level is high. I think I’m going to invest in a new bird feeder for winter and see what else I can learn.

It is sunflower season! They are brilliant, amazing flowers, especially if you are lucky enough to come across a whole field of them…a sea of color. 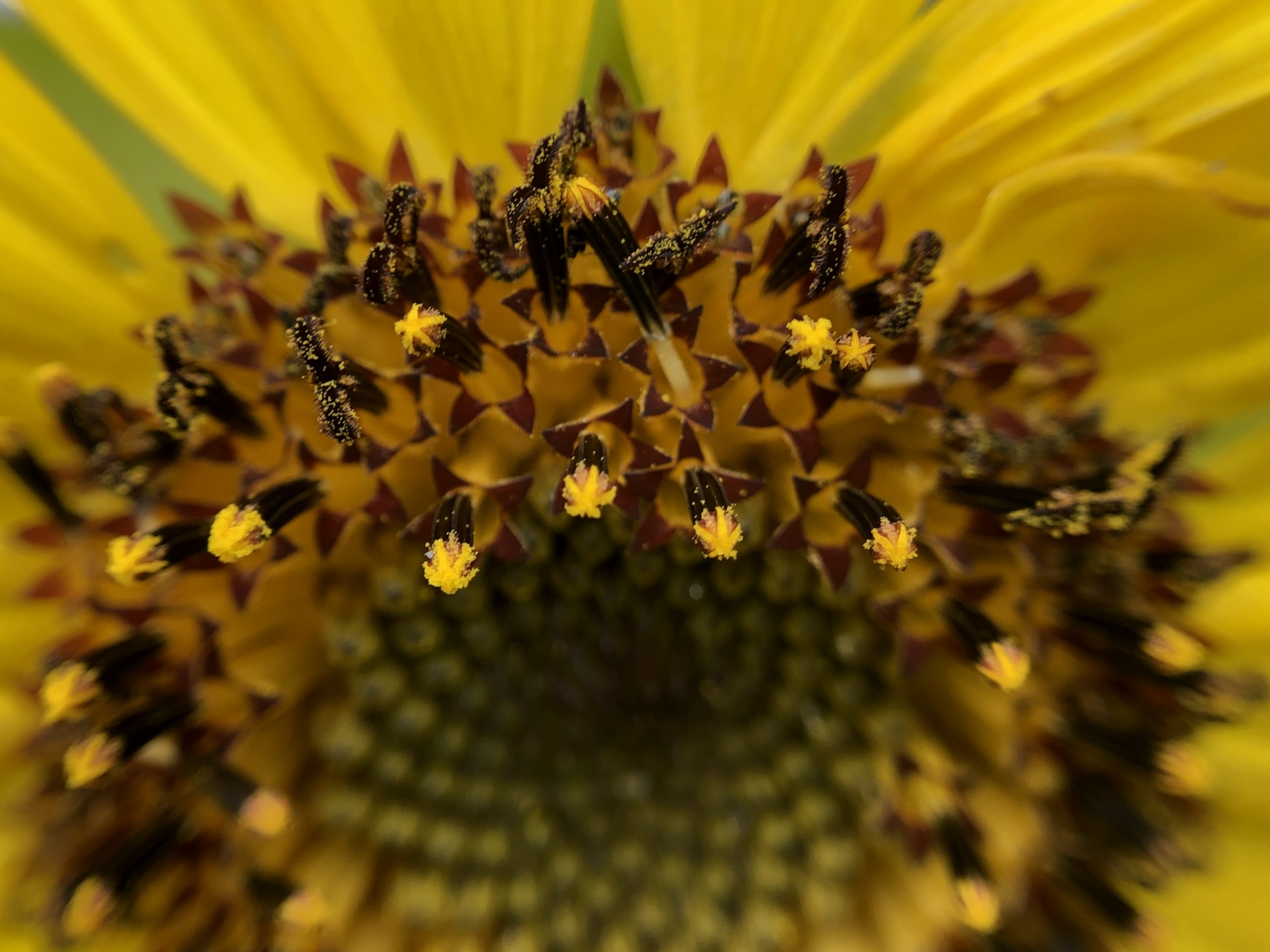 But if you look closer, closer, and closer still, you can appreciate the delicate complexity of these flowers. And in fact, each one is not actually a single flower, but 1000-2000 tiny individual flowers joined at the base. It’s almost as if each “single” flower is a microscopic garden itself. I also learned a new word as I delved deeper into the wonder of sunflowers – heliotropism. If you’ve ever noticed sunflowers, especially a field of them, you’ve probably noted that they are always facing the sun. The heads actually track the sun’s movement, known as heliotropism. 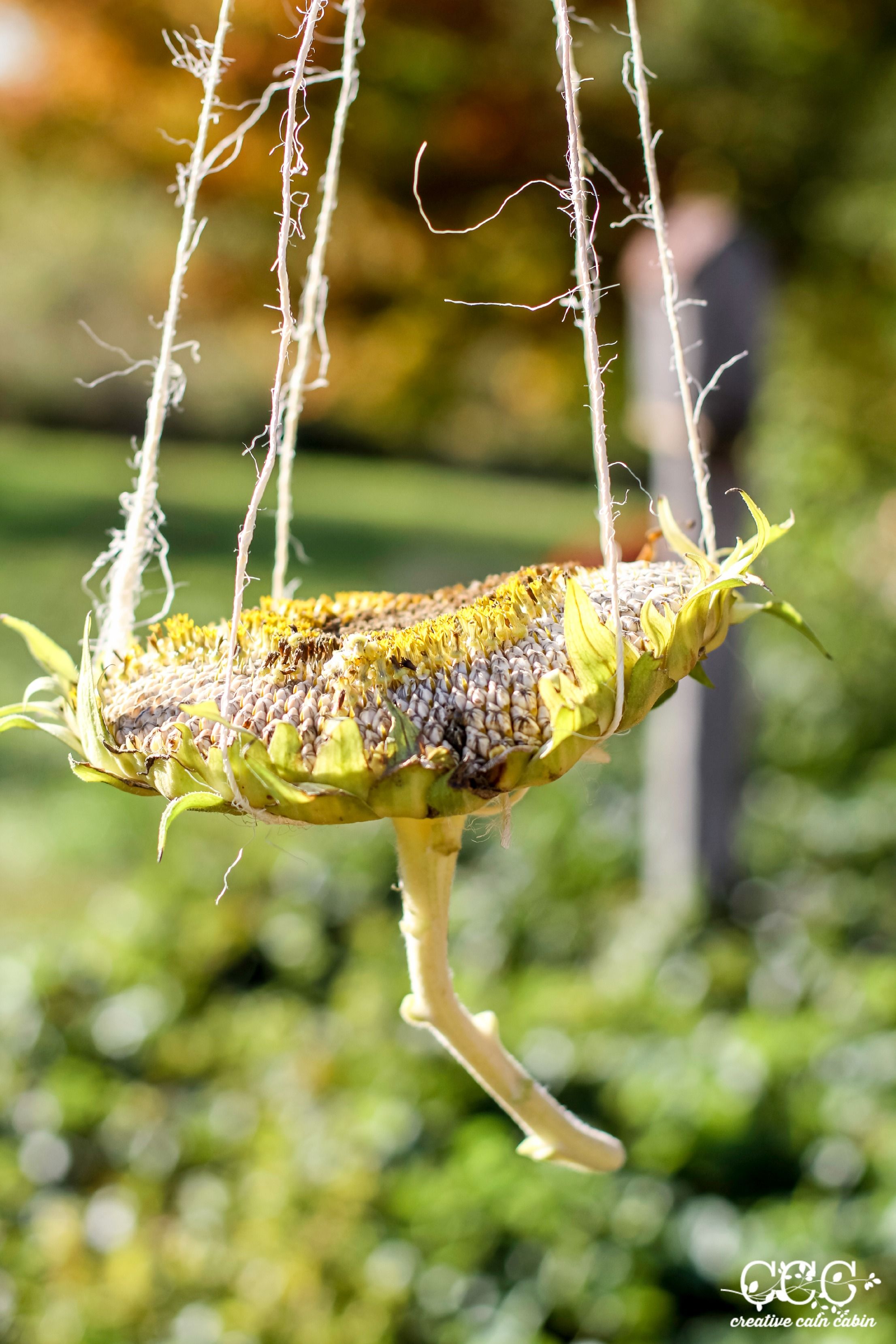 Unlike so many flowers we see in gardens today, sunflowers are native to the Americas. They were domesticated as early as 1000 BC, because they are a great food source; each “one” has thousands of seeds. Today the main use of sunflowers, though, is for oil. Another use I discovered? A bird feeder! Enjoy them while they are blooming, then harvest them for the birds. 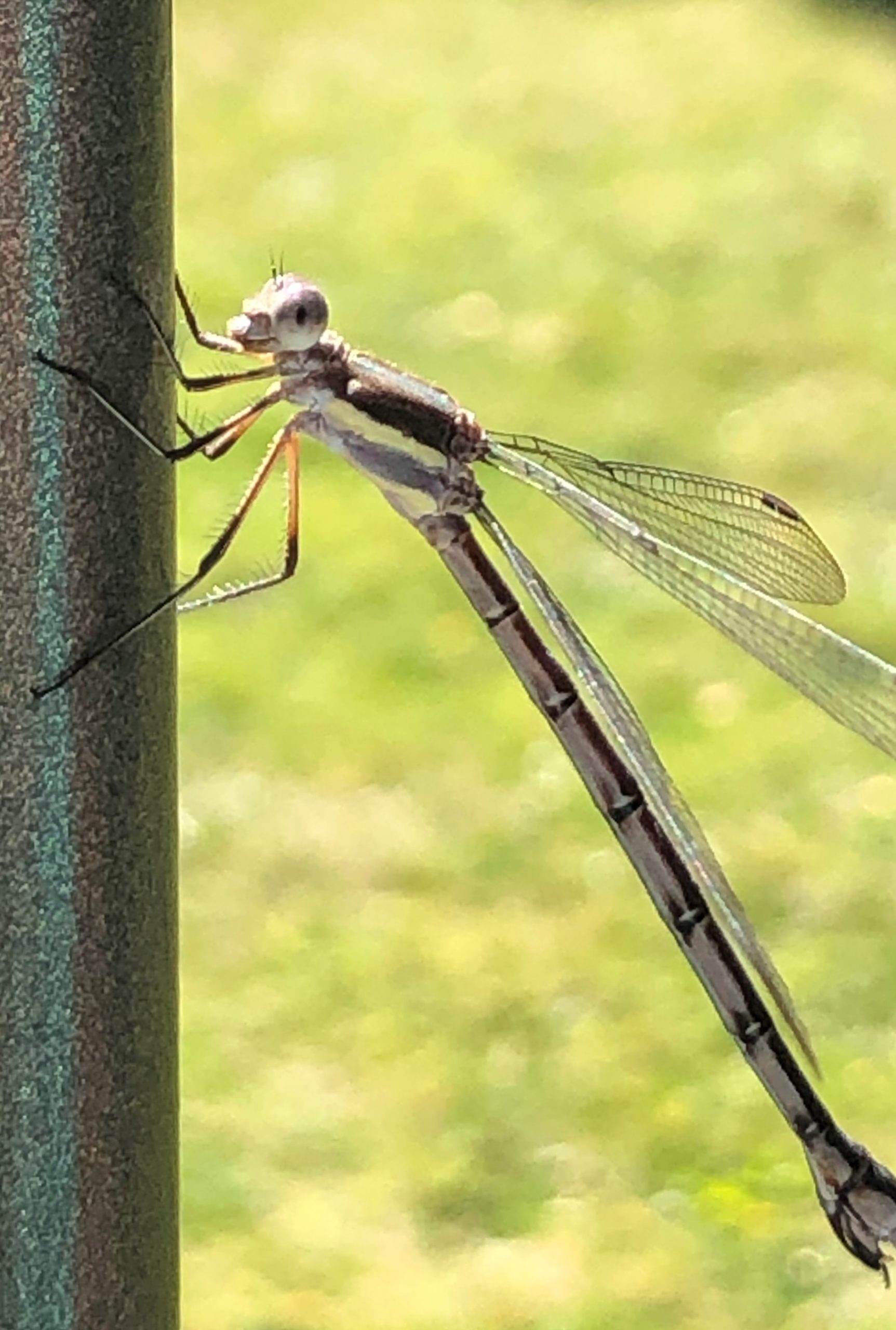 A dragonfly visited me the other day, just outside my window. It was still in the garden when I went out for a better view. I moved closer, and closer, and closer. Minutes went by as I watched. Then I zoomed in for pictures. It was almost as if it turned to look me square in the eye and pose. Thank you, dragonfly.

These insects that have roamed the earth for over 300 million years and today there are more than 5,000 different species of them. They are symbols of joy, transformation, and adaptability, yet dragonflies are actually ferocious 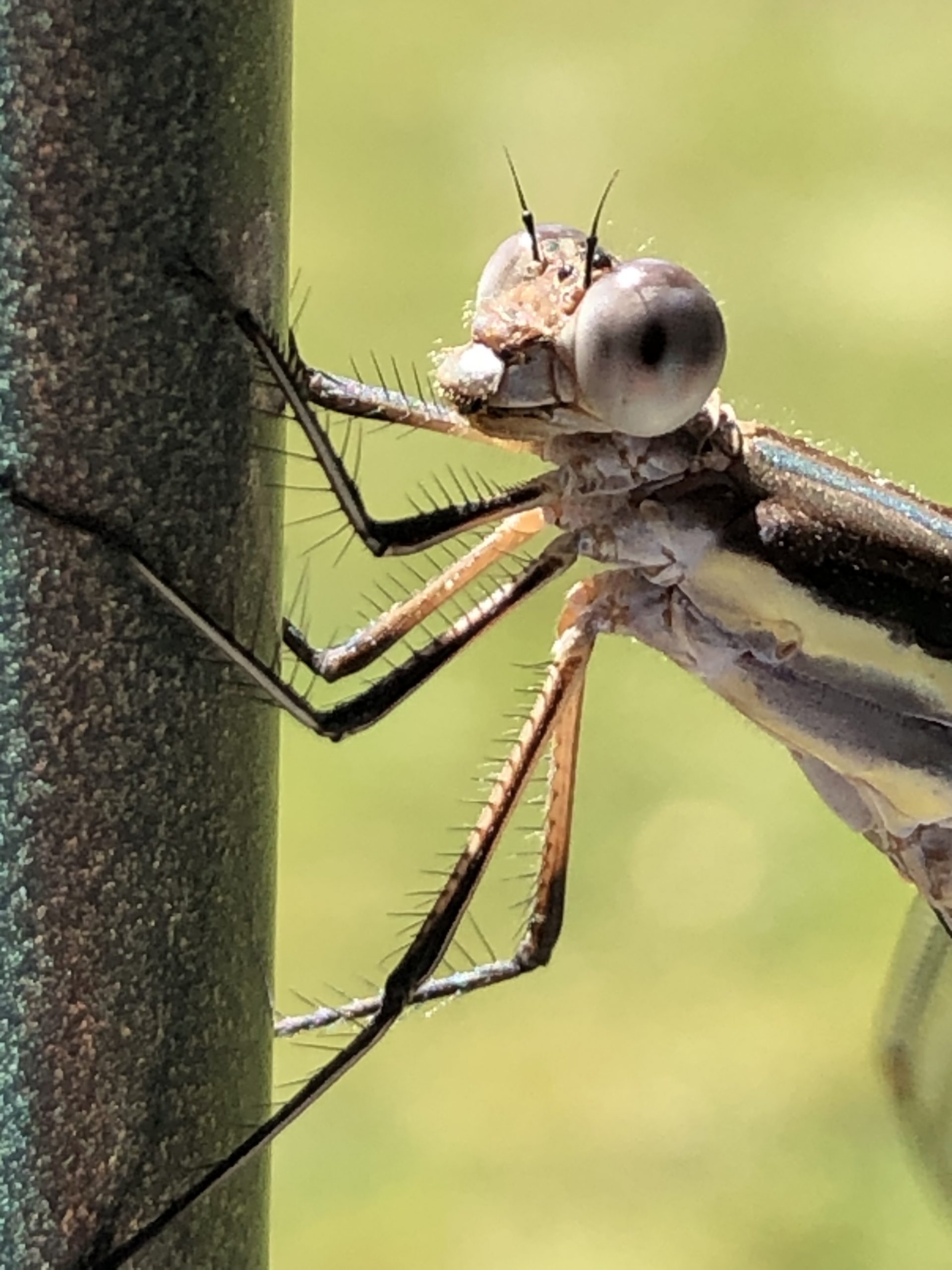 predators with sharp, teeth-like mandibles! Not only that, but they will nab unsuspecting prey right out of the air with the precision of a fighter jet. They catch their prey with their feet, rip off their wings with their sharp jaws so it can’t escape, and eat, all in mid-air. Needless to say, dragonflies have mad flying skills – they can fly forward, backward, and sideways, and can even hover like a hummingbird. Their hunting and flying skills are facilitated by their eyes, which seem to take up most of their head. Yet these aren’t just bug eyes; each one of their two compound eyes has 30,000 lenses. Because of this they have almost-360° vision (with the only exception being directly behind them). I already thought dragonflies were amazing, but of course, better understanding leads to greater respect.