Cicadas – they are loud, and this year in many Atlantic states, there will be a lot of them (up to 1.5 million in an acre!). They spend most of their lives underground and when they do emerge, they must find a mate before they die. And so, the males call out – a sound that can reach 100 decibels. By comparison, a motorcycle, jack-hammer, and a trash truck also reach the same decibel level. When there are millions of them emerging and singing at the same time, it’s a bit like a rock concert. 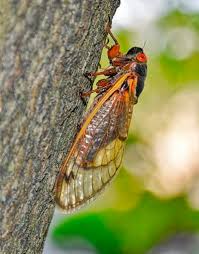 So how do these insects make such a racket? They have tymbals on each side of their abdomen. The tymbals are ribbed, vibrating membranes that produce sound. Cicadas contract and release their tymbals up to 400 times per second. Yes, 400 times per second. Not only that, the abdomen of a cicada is hollow like the body of a guitar, which amplifies the sound. Once the cicadas mate, and the females lay eggs, they die. The eggs will hatch in a few weeks, the nymphs will drop to the ground, burrow in, and the cycle begins again. And for those cicadas emerging en masse this year, they are among the seven of approximately 3,000 cicadas species that emerge only once every 13-17 years.