When you hear the word “fungi” you probably think “mushrooms.” Yet it also includes molds, yeasts, and toadstools – any number of spore-producing organisms that feed on organic matter of which there are approximately 1.5 million different species. They are decomposers. And no matter your opinion about them (mushrooms in particular!), fungi are the foundation of life on Earth. Without fungi, dead plant life would choke the planet. 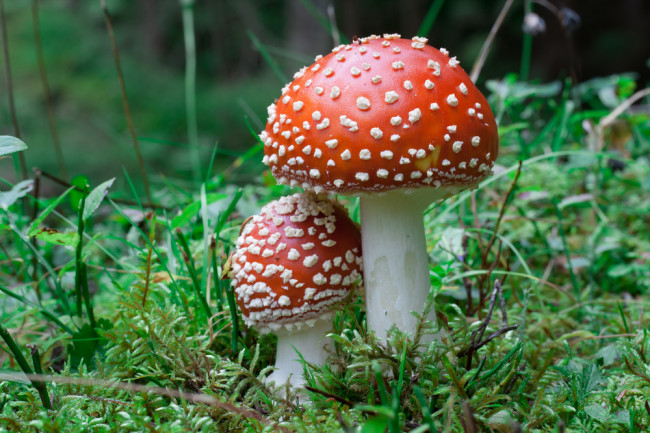 Yet the genius of fungi runs far deeper than just that of decomposer. To begin, the trees in forest communicate using an intricate underground network of fine fungus threads called mycelium. Underneath every footstep there are trillions of these threads connecting the trees. Some experts call this the wood wide web (more on this in another post). In addition, studies have shown that mushrooms could help clean up oil spills. They are used as wastewater filtration systems, as a pesticide, and to aid reforestation. Perhaps one day they will also be the main ingredient in biofuels because they grow rapidly and require far less soil and resources than other crops. In the medical field, the antibacterial and antiviral compounds in mushrooms are used to cure diseases and as an immune system booster. Not only that, fungi can help regenerated nerves and have shown great promise in activating neural pathways in people with dementia.

Oh yes, you can also eat them if you so choose (of course paying attention to the toxic ones you shouldn’t eat). Or use yeast to make baked goods. Love ‘em or not, fungi are important to the overall health of the planet as well as humans.

This post was inspired by the 2019 documentary, Fantastic Fungi. I highly recommend it!

This Friday is the International Day for Biological Diversity. It is a day to celebrate the amazing diversity of life on Earth. It is also a day to raise awareness of biodiversity loss, as scientists estimate that 25% of plants and animals face extinction. It a day to chart a course of action.

Life on Earth is an unbelievably complex, interconnected, magical network of life. It includes bioluminescent mushrooms…yes, mushrooms that glow in the dark. There are also extremophiles that live in Lake Vostok which locked underneath more than 2 miles of ice in eastern Antarctica; the water in this lake has been trapped underneath the ice for more than 15 million years. There are weaverbirds that build these incredible, and sometimes quite large, nests of material intricately woven together. And let us not forget about mustache toads (more scientifically known as the Emei mustache toad); the males grow a spikey mustache made of keratin to fight rivals for the best nesting sites. Mustache fight! There are also carnivorous plants; an arachnid appropriately called a peacock spider; and the strange and wonderful platypus that is part otter, beaver, and duck (and if that’s not enough males have sharp, venomous spurs on both ankles).

Let us all take the time to learn and appreciate the biodiversity all around us. For, as Jane Goodall said: “Only if we understand, will we care. Only if we care, will we help. Only if we help, shall all be saved.” Happy Biodiversity Day! We usually hear woodpeckers before we see them – the rapid peck, peck, pecking on a tree or utility pole or house. Lately I’ve heard a lot of woodpeckers (ah, spring!) and I always stop to see if I can spot the bird behind the sound. And then I marvel at all the adaptations that allow them to live a life of  wood pecking.

Woodpecker beaks and skulls are specially designed to not only bore into wood as the birds look for food, but also to protect their brains from the shock of the boring. Their beaks are strong and sturdy, with a tip like a chisel. They are also designed to absorb and dissipate energy, so the force generated by the pecking is reduced before it reaches the skull. Woodpeckers’ skulls, though, are also unique – they are thick and spongy and fit tightly around the birds’ brains to prevent brain damage. Even the eyes of woodpeckers are suited to a life of pecking wood; they have special clear membranes that protect the eyes from flying debris, like goggles. And if all that cool stuff wasn’t enough, woodpeckers also have amazing tongues. They are long and sticky and have a barbed tip, perfect for plucking insects from inside the holes they drill. And one last woodpecker nugget – there are approximately 300 species throughout the world, with close to two dozen of them living in North America.

‘Tis the season: the birds are singing, the days are longer and warmer, and flowers bloom. Tulips, daffodils, and crocuses get most of the attention, but I happen to favor dandelions. They are like the underdog of the flower world.

Dandelions have a long and interesting history. The earliest records about dandelions date back to the Romans, though the flower was likely carried by humans from place to place long before that. This flower has been used throughout history for medicinal purposes and to eat. Apparently you can also make wine from dandelions. Who knew? Dandelions are also an excellent early source of pollen and nectar for bees. And we need bees!

Best of all, dandelions don’t need to be planted. Or watered. Or tended to. They will just grow. Anywhere. They are much hardier than your average flower. And if you look closely, they are every bit as amazing.