Let’s talk about tardigrades. Also known as water bears, they are an average 1 mm in size. Yet despite their size, they are among the hardiest organisms on Earth. To start, this micro-animal has survived all five mass extinctions. Yes, they’ve been around for a VERY long time (at least 500 million years). These hardy creatures survive being frozen or being heated above the boiling point of water. They are found in Earth’s most extreme conditions – from the hottest to the coldest environments. And because they are so hardy, they live everywhere on the planet including (Antarctica) and in every imaginable habitat. They prefer moist environments or bodies of water they but can go without water for decades. 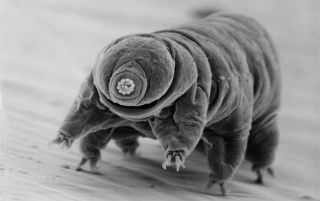 Chances are there’s some near you – possibly in moss or lichen. If you have a high-powered microscope and need an activity, go on a bear hunt! Collect a sample of moss or lichen and place in a shallow dish with water for 24 hours. Then remove the excess water from the dish. Next, shake or squeeze the moss or lichen to collect the water that’s left. Transfer the water to a microscope slide and look for the bears!