With this blog I’ve reached the end of my cover reveal party. Antifreeze, Leaf Costumes, and Other Fabulous Fish Adaptations (Nomad Press, August 2020; illustrated by Katie Mazeika) is the last of the five picture books about animal adaptations coming out in August. Fish-wise, I usually prefer the pretty, tropical ones moving about a coral reef. Yet, like with the other books in this series, I learned so much about fish during my research and gained a new appreciation for them. 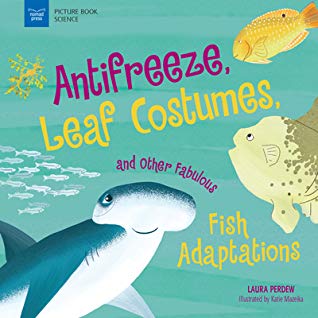 You may already be familiar with salmon runs and their migration back upstream to spawn in the same location where they began their own lives. The feat is epic. But while writing this book, I learned of another fish that must climb waterfalls to reach their spawning grounds. Yes, waterfalls. Even more epic. The Nopoli rock-climbing goby uses two suction cups on its body, one under their mouth and one under their belly, to inch up the rock. Mind you, these fish are not very big and they can climb waterfalls more than 300 feet tall. For their body size, it would be like a human climbing Mount Everest three times! A fabulous adaptation indeed.