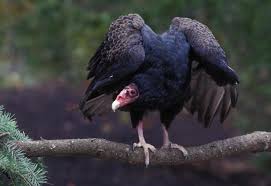 Let’s talk about vultures. They are definitely not the most glamorous of animals. After all, they’re a bit odd looking (even ugly?) and they eat roadkill. But they are oh, so cool. Let’s start with why many species of vultures are bald. That’s so when they stick their heads in that rotting, nasty roadkill, the festering blood full of bacteria doesn’t get stuck in their feathers! And now you’re probably wondering, how they can eat rotting meat in the first place and not get sick. Turns out that the stomach acid of vultures is so corrosive that it can dissolve some metals and therefore makes short order of any bacteria in the dead meat they feast on. That stomach acid comes in handy in other ways too. Once digestion is complete, vultures poop on their own legs. Disgusting? Most certainly. However, not only does that help vultures to cool down on hot days, but the acids help to disinfect their legs and feet after they’ve been mucking around inside a carcass. Yes, you read correctly. Their poop acts like a cleanser. The stomach acid of vultures is also useful when it comes out the other way – when they barf. Some vultures will projectile vomit when threatened. If the smell alone doesn’t send a predator running, the acid that is in their vomit will. No, vultures are not glamorous; but there’s no denying it – they are amazing.