How did I make it this far in my life without knowing about the velvet worm? These caterpillar-like creatures have been around for over 400 million years and there are close to 200 different species! These little critters, with waterproof skin and retractable claws on their stubby, cone-shaped feet, live in the tropics. 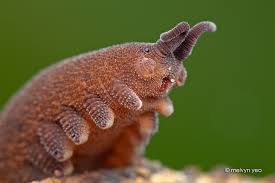 But while all of that is truly fascinating, the most interesting thing about the velvet worm is the way it hunts. They slime their prey. Velvet worms sneak up on an unsuspecting bug, and using nozzles under their antennae, spray the victim with a slime that quickly hardens into a trap. The story gets even better. Once the prey is subdued, the velvet worm bites into it, injecting it with a digestive saliva that liquefies the inside of the insect, making it easier to eat! Oh, they also eat their own slime. D-lish.