There really is such a thing as a coral nursery! In fact, there are many. In the early 2000s, a man named Ken Nedimeyer discovered that he could purposefully grow and transplant coral back onto damaged reefs. In time he founded the Coral Restoration Foundation (CRF). He experimented with different ways to grow the coral, ultimately settling on a tree structure anchored to the ocean floor. Each “tree” has a main trunk and many perpendicular branches; up to 100 coral fragments are hung from those branches. Many trees together make up a coral nursery! Once the coral has grown it is “outplanted” on a reef. 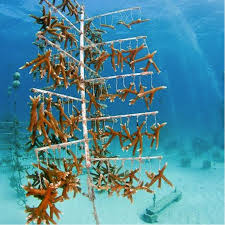 In 2009, CRF made history when their nursery-raised coral spawned naturally after being reestablished on the reef. It was the first documented case of this in the world. To date, CRF has seven offshore nurseries and is cultivating 11 different species of coral. They have planted more than 70,000 corals off the coast of Florida.