I am a nature documentary geek and I’ve subjected my family to my geekdom for years. Other families watch movies together, we watch documentaries. It all started with the release of the Planet Earth DVD set by the BBC in 2009. Then it was The Human 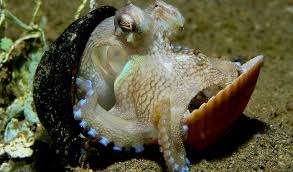 Planet, also by the BBC, in 2011. We’d watch whatever we could get our hands on. Now there’s Netflix. Again, some people watch it for the movies or series, we watch it for the nature shows. Last night we were watching Life Story (yet another BBC production) and saw a segment on the veined octopus. Whoa.

I knew that octopuses were intelligent. But this segment took my admiration to a whole new level. These cephalopods use discarded shells and even coconut shells as protection! They even carry them around with them as they walk along the ocean floor. Scientists debate whether or not the octopuses are using the shells as tools, which requires brain power. Some think it’s just pure survival instinct in action. Perhaps. No matter, it’s still pretty stinkin’ cool. It gets even better…they use the coconut shells as transportation. They pull the two halves of a coconut shell around them and roll along the ocean floor!